Looking at the factors that contribute to (and/or result from) Atlanta’s ranking as #1 in economic inequality, a clear pattern emerges. The experiences and outcomes of Atlanta neighborhoods are divided along northeast and southwest lines in nearly every way.

When the highest income neighborhoods are living one and a half times longer than those with the lowest income, these inequities are a matter of life or death.

In not-new-news, AJC’s analysis of Census data shows Atlanta has the highest income inequality among major US metros.

“[M]any Black residents are not seeing the benefits of [strong economic growth], said Janelle Williams, co-founder of the Atlanta Wealth Building Initiative. The median household income for a Black family in Atlanta is $28,000, while the median income for white families is roughly $84,000. Overall, Black residents account for half of the city’s population.”

This analysis uses the Gini coefficient based on the US Census Bureau’s 2016-2020 American Community Survey data. “The Gini coefficient measures how equally income is distributed among a population and is expressed in a decimal format ranging from zero to one.”

While the City of Atlanta is No. 1 among cities, “the Atlanta metro area ranks as No. 227 for income inequality, with a Gini co-efficient of 0.4708, significantly better than the New York metro area (No. 39) and the Houston metro (No. 117).” 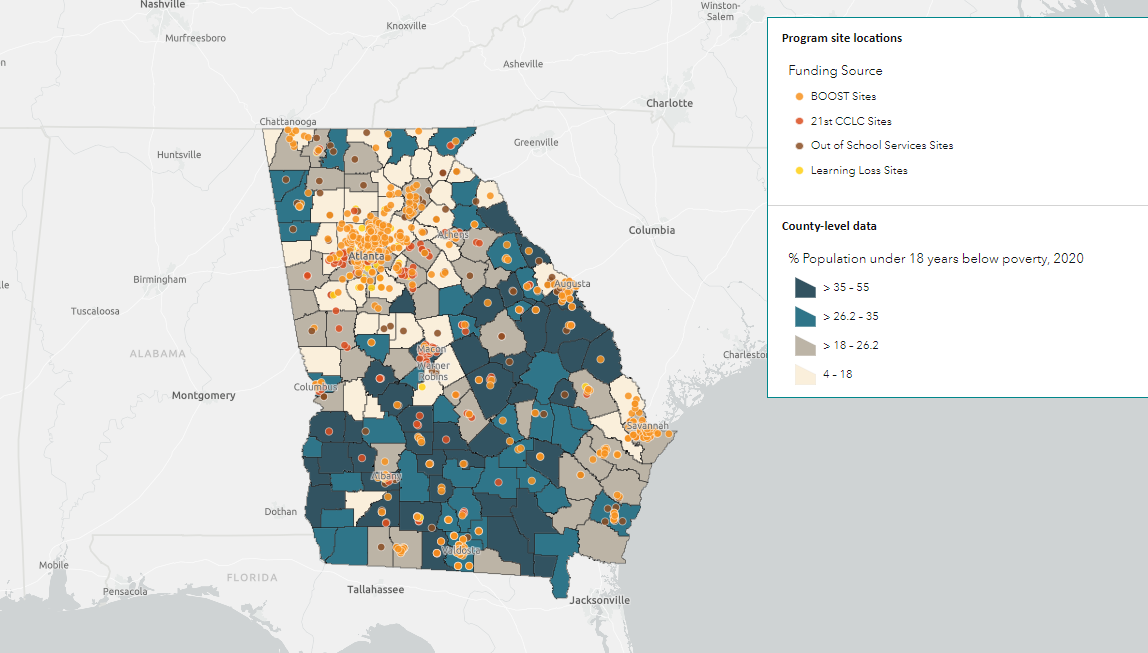 The recently launched map of Georgia’s government-funded out-of-school programs highlights some communities with limited access to these learning opportunities. Out-of-school education programs are essential because consistent participation in these activities has been shown to improve academic outcomes, help to close the achievement gap, reduce school absences, and improve social-emotional outcomes. Some of GSAN’s highlights from the interactive map are: 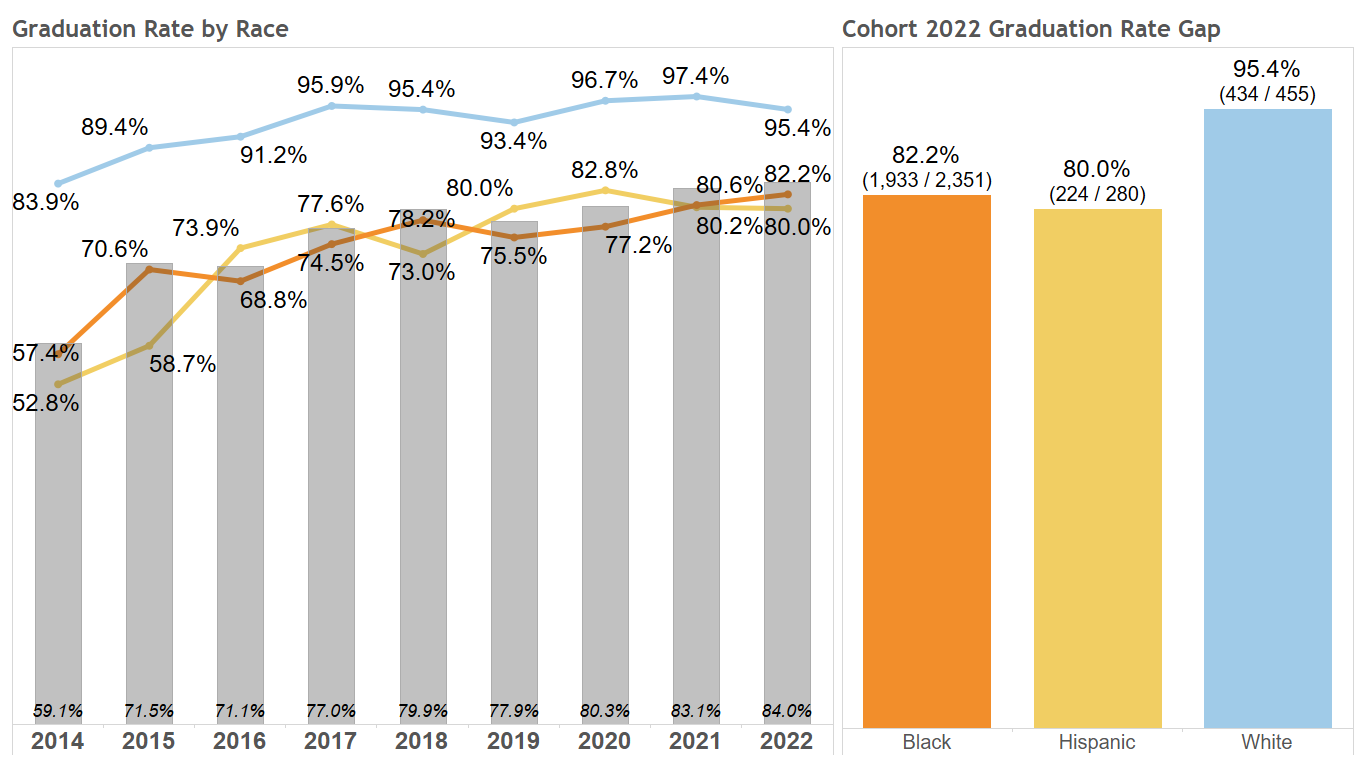 From the press release:

In new research from Raj Chetty’s team at Opportunity Insights (published in two parts in Nature and summarized in NYT), a massive analysis of economic and social networks found that exposure to and friendships among people of different social classes is one of the strongest predictors of upward mobility.

The study found that lower socio-economic groups make connections in their home neighborhood and at religious institutions, while higher SES groups tend to make their bridging connections in college. This research builds on their prior economic mobility analysis and development of the Opportunity Atlas.

So what do we do with this information?

Programs, services, policies, and investments that facilitate interactions across diverse economic groups will likely have lasting impacts. Policy level solutions might include inclusive housing and planning decisions. At a more local level, effort might be made to reduce in-school student segregation. Programmatically, even experiential programs outside of participants’ own neighborhood may have an impact. 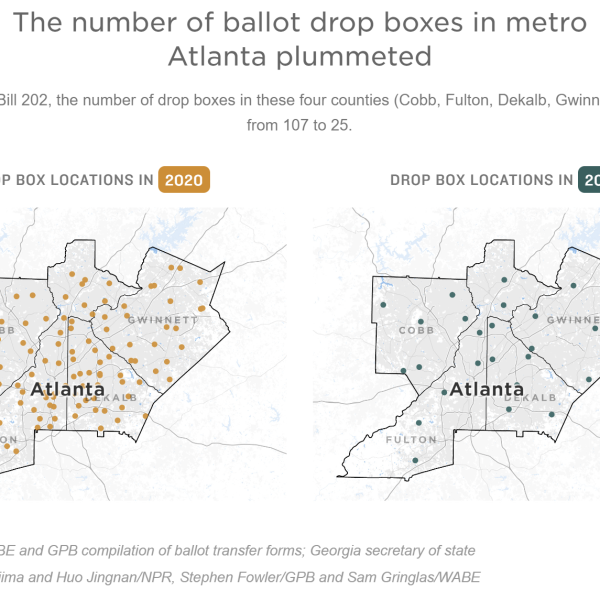 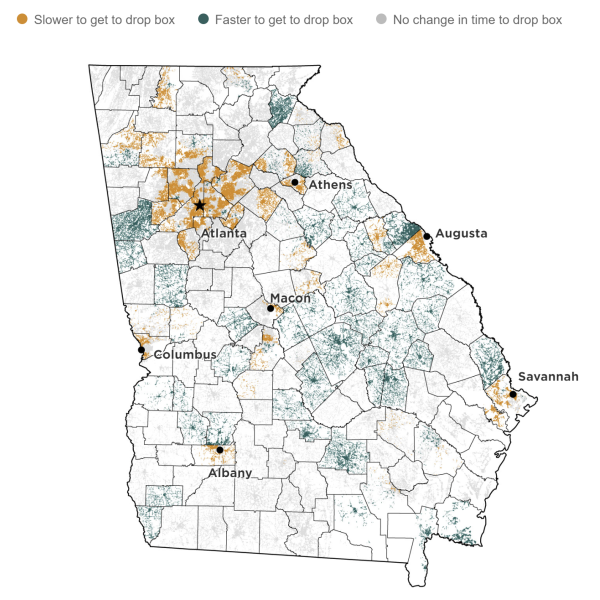 A new WABE and GPB analyzes the impacts of the newly enacted law (SB 202) that affects the number and location of ballot boxes across the state. The finding point to disparate outcomes, including:

Atlanta recently conducted its annual “Point in Time” count to evaluate the number of homeless individuals in the city. The count was canceled in 2021 due to the pandemic, but 3,240 people were counted in the city of Atlanta in 2020. The official numbers for the 2022 count will not be released until later in the year, but recent trends have shown that the pandemic may have worsened homelessness. Recently, more people have been sleeping outdoors rather than in shelters. In Atlanta, there are 2,800 beds available in shelters, but many individuals have turned down a bed due to COVID-19 concerns. Another new trend has emerged: there are more individuals that are newly homeless than ever before. There is some good news, though. As many as 700 previously homeless individuals were able to secure stable housing with pandemic-relief funding.

Takeaway: Reducing homelessness in the wake of the pandemic will rely on improved housing aid and policy as well as creative sheltering options to safely house individuals.

Georgia Partnership for Excellence in Education (GPEE) recently released their report listing the top ten issues to watch in 2022. The report highlights the lasting effects of the pandemic on education, especially for Georgia’s most vulnerable populations including students of color, low-income youth, rural residents, workers lacking postsecondary training, and adults caring for children and elders. GPEE is focusing on equity as the state recovers from the pandemic, and the list of ten issues to watch serves as a starting point for GPEE’s goal of ensuring 65% of GA’s residents aged 25-64 will hold a postsecondary credential by 2032. The ten issues are: 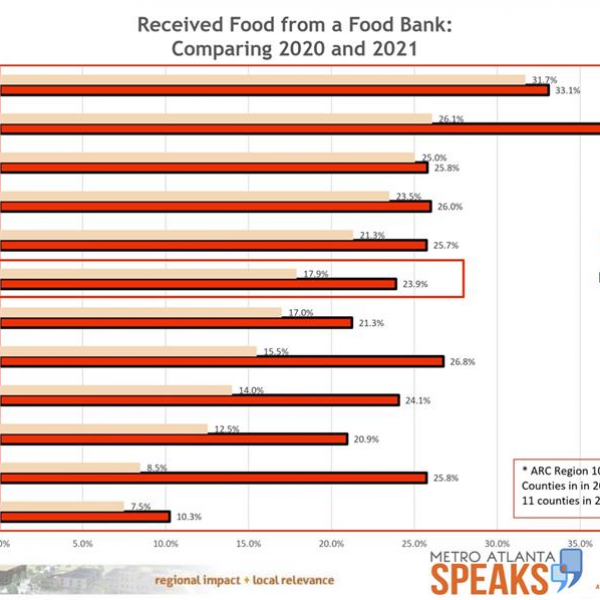 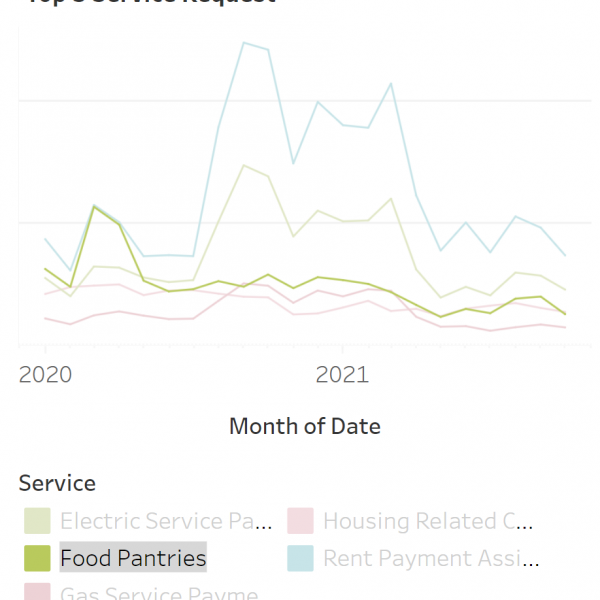 This year’s Metro Atlanta Speaks (MAS) survey, the largest public opinion survey in the Atlanta region, showed that 23.9% of respondents reported receiving food from a food bank compared to 17.9% of respondents in 2020. United Way’s 2-1-1 call data, however, found that fewer people were calling to request information about food pantries in 2021 than at the start of the pandemic. Calls about food pantries peaked in March 2020 at 2,255 calls. Comparatively, food pantry calls averaged around 700 calls per month in 2021. This could indicate that many families were concerned about needing to use a food pantry after the initial shock of the pandemic, but actually continued to need assistance over one year into the pandemic.

Takeaway: The increased use of food banks in 2021 indicates the need for a more aggressive approach to addressing income inequality.

Free Application for Federal Student Aid (FAFSA) completion has decreased by 4% during the past year. The pandemic has likely contributed to this decrease since students have had limited social support from peers and school staff to help them navigate the complex financial aid process. The drop in completions was especially pronounced in high-poverty schools which completed 27% less applications than other schools. FAFSA completion increases postsecondary enrollment from 55% to 90% and increases postsecondary persistence by 4% per $1000 in financial aid. Low-income students are disproportionately missing out on these benefits (Learn4Life).

Takeaway: Building capacity and opportunities for postsecondary enrollment and financial aid support should be prioritized in economically disadvantaged schools. 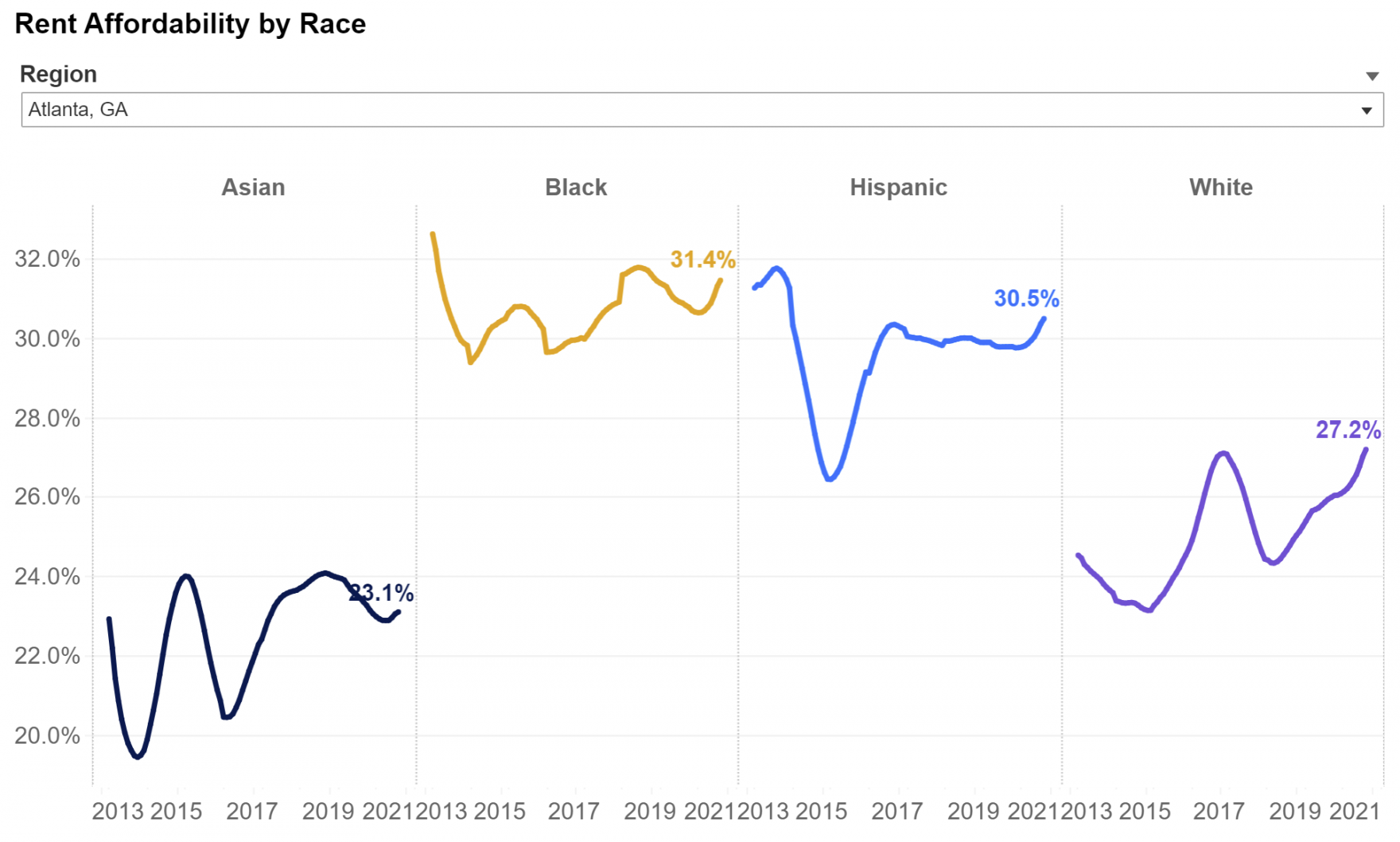 “Rents have risen dramatically in 2021 in metro Atlanta and Black households are spending the largest portion of their income on rent in comparison to other races. According to a new analysis by Zillow, rent affordability for all renters in metro Atlanta is 29.2%, which is almost a full percentage point over 28.4% in 2019. The average rent is $1,827 as of August, which is up 20.4% year over year and up 3% month over month. Black households in the Atlanta area are spending 31.4% of their income on rent. In comparison, Latinx are paying 30%; whites are paying 27.2%; and Asians are paying 23.1%.” (CBS46, Zillow)

Despite active COVID-19 cases in secured detention facilities more than doubling between March and mid-December (among youth and staff), the number of youth being detained are on the rise. Black and Latino youth represent an increasingly larger share of the detained population. [report] (The Annie E. Casey Foundation) 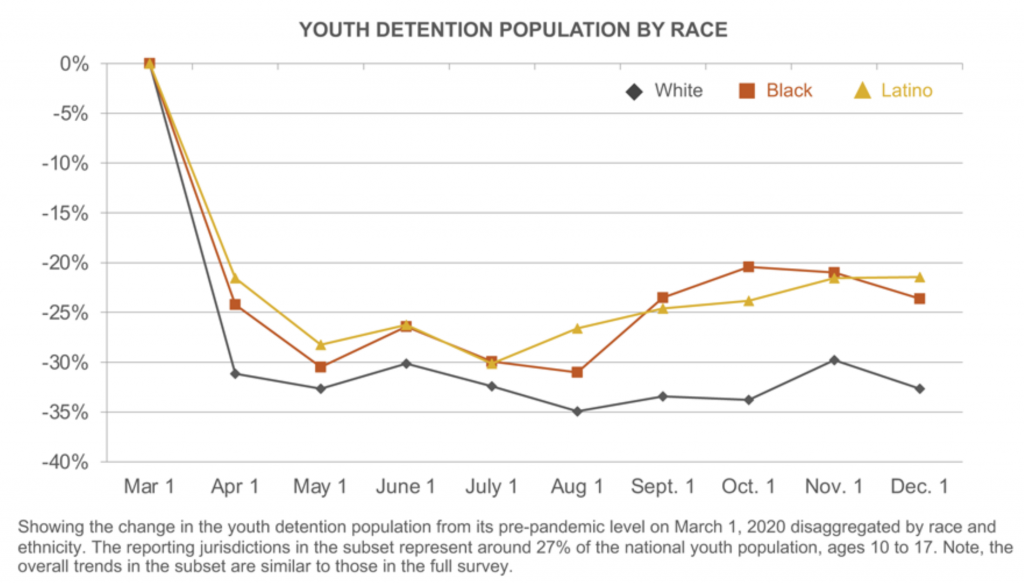 In a new fact sheet from the National Women’s Law Center, we’ve learned that:

Georgia Partnership for Excellence in Education (GPEE) released its “Top 10 Issues to Watch in 2021” report, which includes:

Through the first two phases of the CDC/Census Bureaus household pulse survey (April–December 2020), symptoms of depression and anxiety are on the rise, especially among Black, Latino, and multiracial individuals. (National Center for Health Statistics)

“The rapid adoption of remote work and automation could accelerate inequalities in place for decades. Economists say the resulting ‘K’ shaped recovery will be good for professionals—and bad for everyone else.” [article] (Wall Street Journal)

Receive monthly newsletters from 33n and Neighborhood Nexus, as well as occasional updates and events. 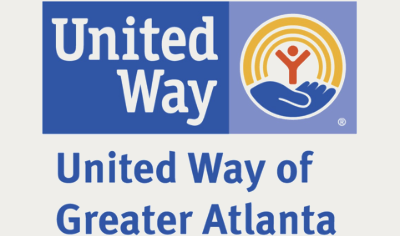